The physical leg of Watches and Wonders in Shanghai will end today, it was a different experience for all of us. Whereas watch brands are trying to get used to making a digital fair (the fair was made digital last year, but it was not as extensive as this year), we watch editors tried to understand the watches introduced in a busy program that almost did not have time to eat. We wanted to act as a newspaper with our articles that we wrote at evenings.

Apart from the workload, the novelties excited us like children who were taken to a toy store. Especially one of these watches was the kind that deserves to be our last article about the fair: Jaeger-LeCoultre Reverso Hybris Mechanica Calibre 185. Otherwise, the first four-sided watch (and has 11 complication) of horology world.

Reverso’s name inspired by the Latin “I turn around”. In the 1931, it was created to withstand the rigours of British Polo players in India. The timepiece was protected by rotating the dial during the game. Over time, this second dial has become an area of embroidery, personalization, and has become one of the most enormous watches that can be gifted.

This year, we celebrate the 90th anniversary of this unique model. For this anniversary, “the great manufacturer” Jaeger LeCoultre also takes the Hybris Mechanica one step further, which is to be expected from being skillful enough to combine a full 180 talent in its history and maison. The Reverso Hybris Mechanica à Triptyque, the platinum three-dial version of the Hybris Mechanica, which we saw in 2003 for the first time, it was produced to 75 pieces in 2006. Reverso celebrations had started with a book that contains its history and important examples on its ninth anniversary, now it continues with the first 4-dial watch.

The main dial of the watch features the perpetual calendar and flying tourbillon, which is the highest complication of watchmaking. The day of the week, the month are displayed on the dial, whereas the date of the day is displayed in two separate discs. These date indicators change suddenly at night. The leap year (from 1 to 4) is seen through the two small windows at the top of the timepiece, and the day-night indicator on the right, which we understand from its color change. The third dial also displays the exact date of the next leap year.

The minute repeater, which can be seen when turn the main dial, has a digital watch display at 12 o’clock, with a red marker marking the minute scale. The sound of the repeater, where we see the hammer system at 6 o’clock, is loud and clear that suitable for a “Sound Maker” brand; this is provided by the mechanism connect to crystal. The hours peal in a low tone, the minutes in a high tone. Moreover, the Caliber 185 goes beyond a normal minute repeater, eliminating the gap between hours and minutes if there are no 15 minutes to ring. For instance, after 13 hours pealed in low tone on 13.08, 8 high tone alarms go off.

Third dial display the moon phases in the North Hemisphere. Let us remind that even one of these complications will take a watch to the top. As always, Jaeger-LeCoultre, presents high-level features a with a modest presentation, without polishing and turning it into a feast. For instance, although many watches have these moon phase, most watches usually require the adjustment of the moon phase every 122 years, whereas no adjustment will be required for 1,111 years at this watch. Another brand would have been promoting over the years, even just for this feature.

In the fourth dial, on the left we see “Draconic Cycle”, which displays the orbital movements of the Moon around the Earth and the Sun (thus we watch the Sun and Lunar eclipses), while on the right we see the distance between the Moon and the Earth caused by the movement of the Moon around the Earth with the “Anomalistic Cycle”. Let us present to your attention the enamel micro-world painting seen from the Northern Hemisphere on the third side and the watchmaking arts applied in the Moon phase seen from the Southern Hemisphere on the fourth side. The trademark blue screws and blue hands are also seen on the dial and the second dial.

On the first and second dials, we see watchmaking arts such as Clou de Paris guilloche embroidery, skeletonizing on day, month and date oscillators, carving-painting on Moon and Earth figures.

The Jaeger-LeCoultre Hybric Mechanica Caliber 185 should be the watch to choose to demonstrate “what can be done” to someone who has no knowledge of watchmaking. So, what kind of watch will the brand produce for the 100th anniversary of Reverso?

Big Bang DJ Snake is a new model limited to 100 pieces designed by Hublot in collaboration with French musician DJ Snake, it carries the nightlife to your wrist with its blue and purple dial.

The Next Chapter is About to Begin: A Colorful Dial Created from Ocean Waste

Oris devotes a new chapter in its mission to save the oceans to the unique Aquis Date Upcycles, which are produced from ocean waste. 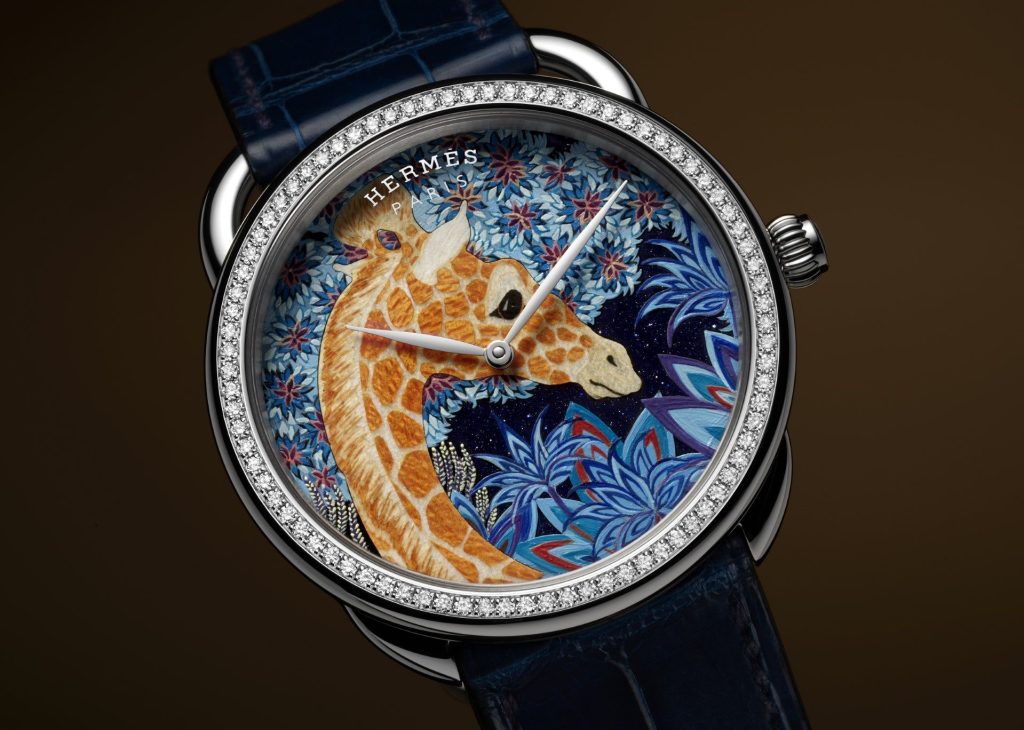 A gracious giraffe head concealing behind an acacia tree… The dial of Hermès Arceau The Three Graces, which is made from 195 pieces of wood, adds a new example to the artistic craftsmanship watches.